Nothing new on the west side…

Life has been as usual since my previous post. Everything is kind of “off side” in regard to big world’s concerns at the moment. But this is what the life in Vancouver look like, in general. The only turmoil was the recent oil spill from one of the cargo ships. Due to some mechanical failure, about 2,700 litres of bunker oil ended up in ocean, right near the English Bay, a very popular beach in Vancouver. Even though it was, luckily, a small spill, social and political life burst with public outrage and protest. Even though Environment Canada and Coast Guard reacted within few hours and started securing and cleaning the area, city government was informed more than 12 hours after the spill. So, no one really knew until it hit the news. Politicians, as useless as they often can be, played “the blame game” pointing fingers at each other, while responsible agencies supported by many volunteers are still cleaning beaches and shores. Sarcastically, I am kind of glad that it happened over here, in populated area where everyone could see what kind of damage, even in a small scale, BC coast is facing with increased ship and tanker traffic. Our provincial government and premier are forcing public opinion to accept building of pipeline from Alberta to BC coast but the problem is that tanker terminal should be built in the pristine and the most beautiful part of our coast. I don’t even want to think what would happen if the spill happens there: no one would know for days and the damage would be irreparable. Remember Exxon Valdez oil spill in Alaska, in 1989? Well, they are still cleaning it…
In mean time, whenever weather permits, we try to go out and hike a bit. There was no too much snow in the area in last 3 months so some trails – mostly easy ones – are accessible if it’s not raining. We went to Lynn Headwaters park and Norvan falls as well as on one new trail near Whistler – Ancient Cedars trail. Other than that, we are trying to walk for at least 10km every weekend – sun or rain – to try to prepare for our summer Vancouver Island adventure. Once we have the itinerary, I will post it here.

Norvan falls; not too much water at the moment;

Black Tusk; snow remains only on higher altitudes; this was a mild winter in southern BC;

Ancient Cedars trail; me standing near one of the big cedars;

Last Saturday was kind of mixed sunny-rainy day; we didn’t really feel adventurous so we decided to visit a nearby Maplewood farm – actually a small amusement park with all kinds of domestic animals. “To pet the goats” – said Sandy. 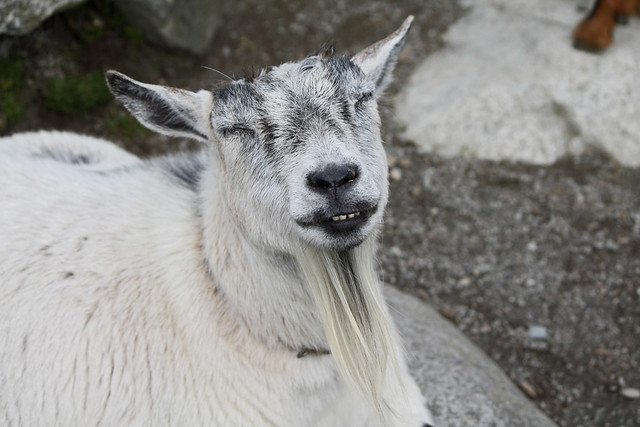 wood duck in nearby pond;

In the afternoon we went for 11km walk. Just to keep us going. Literally 😀

21 Responses to Nothing new on the west side…