Haida Gwaii – The Way In

“Once you’ve reached the edge of your world, ours begins.”

We planned this trip back in January 2020, but Covid crushed all our arrangements; Haida nation, who is governing the islands, decided to shut down access to all non-residents in an attempt to control the spread of the virus. We were disappointed, of course, but respected the decision that aimed to save lives in that fairly remote area, hoping that in nearby future we will be able to plan the trip again. And it happened this summer.

While researching the best – and cheapest – options to get to Haida Gwaii, we went through BC Ferries web site and various airlines’; islands are located on the north-west corner of British Columbia, far away from the Metro Vancouver, where we live. There are several options available: to fly from Vancouver to Sandspit, Prince Rupert or Terrace. But, beside the cost of the flight, there would be additional cost for renting a car and I couldn’t find any rent-a-car agency with available vehicles in Sandspit. And we would need to pay for ferry from Prince Rupert anyway. The other option was to go to Port Hardy on northern Vancouver island and get to ferry, but that would cost almost the same as flying – there are 3 ferries one way and the same in return, plus it would take 3 days anyway… So we decided to drive, as the cheapest option.

Distance from Vancouver to Prince Rupert is about 1800km; we decided to divide it into a 3 days trip, with stops in Vernon, Prince George and then catching an overnight ferry in Prince Rupert. Highway from Vancouver to Prince George is kind of easy and somewhat boring: wide lanes, many passing opportunities, not too much traffic; San and I were switching driving duties, making several stops to gas up and have something to eat. Anyway, first two sections of about 600km each were mainly uneventful, except when I encountered small flock of grouse in a middle of the highway lane, standing in shade of a big rock. Slamming the brakes was not an option because of a car driving too close behind so I kind of tried to swerve, but I still think I nicked one of them. I looked in the mirror and saw them all running away from the highway, the other car having it easier than I did.

It was mostly “uncharted” territory for me; I have never been anywhere northern than 100 Mile House and even that was during our short winter trip to Green Lake in Caribou. I found area around Williams Lake quite beautiful, farms and lakes like in Okanagan but much greener. And a lot of smaller campgrounds along the way to consider for future trips.

Last section, from Prince George to Prince Rupert, proved to be more difficult than expected; boring until Smithers and exhausting after it. Also, there are more wildlife – deer – along the way, prompting for more careful driving (at one point a truck who just passed me, found two deer in the middle of the lane, all while speeding at around 140km/h; it missed them but just for a fraction). Another beautiful section of highway is between Terrace and Prince Rupert, along Skeena river. Unfortunately, I don’t have any photos, we were rushing to do some shopping before catching the ferry and that, with a long drive, left us little time to stop for sightseeing.

Ferry trip was uneventful, we slept through 7 hours long sail between mainland and Skidegate. Ferry arrives at 6 a.m. while nothing is open and since we didn’t have any coffee or breakfast on the boat, we had to wait one more hour till first restaurant opened.

But, finally, we were there. 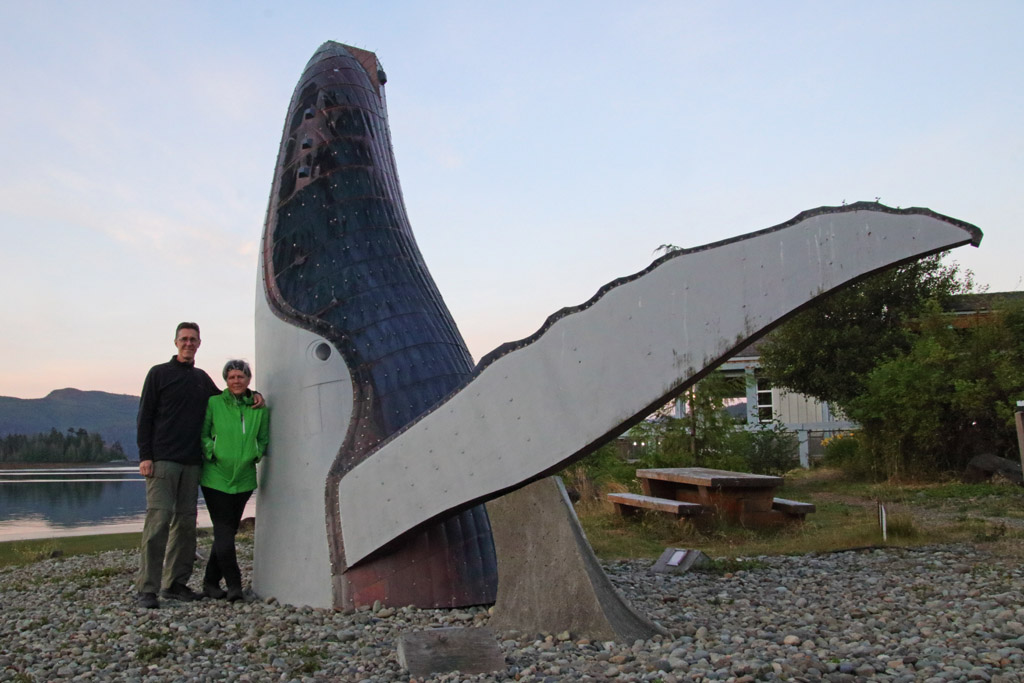