“Compare the torrent and the glacier. Both get where they are going” – Ursula K. Le Guin

When we left Vancouver that Friday afternoon, rain was following us all the way to Merritt; our goal was to get to Mt. Robson Provincial Park, some 700km toward north-west, roughly. We knew that July is not the perfect time of the year to go there – ideally it would be August, less rain – but I couldn’t get my holidays at other times. And, as someone said, the rain doesn’t matter, just pack and go.

After spending the night in Merritt, morning brought some sun and blue skies and a little hope that weather forecast was wrong. But it is Okanagan, it doesn’t rain that often during summer. Once we came closer to Rockies, rain returned. It was not that bad though, good enough to have a glance toward the highest mountain of Canadian Rockies.

Mt. Robson 3954m, big enough to make its own weather

A plan was to hike to Berg Lake, behind the mountain in a back country and spend three days overall on that trip. If we just knew how beautiful there is…

thanks to a tip from a couple of hikers, we took a camp site with a premium view to Berg (left) and Mist (right) glaciers;
Nature is stunning over there and if we knew how many additional one day hikes are available, we would plan to stay longer. But what we’ve seen made a big impression and we decided to come back, as soon as possible. Maybe even next year.
Our next destination was Jasper, less than 90km to the east. A number of tourists that “greeted” us felt like a shock; after spending a lot of time in back country with alike minded people, insanity in Jasper felt almost repelling. But the main advantage of Jasper is that so many natural beauties are within a reach of a road. We didn’t plan to go to back country (there are some beautiful places there, all require several days of hiking), but did some smaller hikes or enjoyed a scenery that could be reached by car.

Mount Edith Cavell glacier; a viewpoint is on about 2100m, most of it accessible by car

The last part of our trip was in Columbia Icefield, more precise Athabasca glacier. Months ago we decided to pay for a guided 3 hour trip over the glacier. A bit pricey but worth every dollar we payed for it. We walk on the ice, drank the water from it, enjoyed the fact that big rain storm moved away just in time 🙂 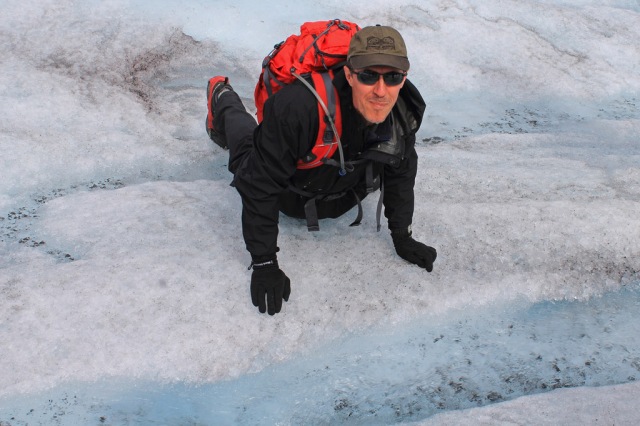 drinking from the stream of the cleanest water on Earth 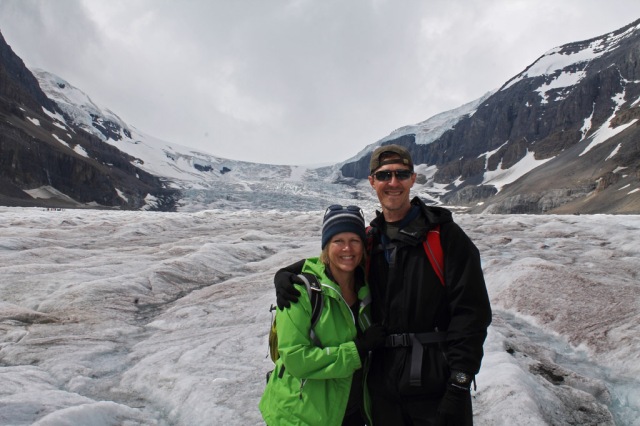 standing on 200 meters of ice, this is how thick a glacier is at that point

Columbia Icefield, atop of continental divide, is famous for the fact that waters, that come out of its glaciers, eventually end up in 3 oceans – Arctic, Atlantic and Pacific. And if you take a look at the previous photograph, on right side, behind me is a mountain ridge and the continental divide is right there.

Even though for most people, summer means sun, beach, ocean, etc, etc… for us it meant ice, this time. Rain was there just as a spice to overall feeling, not welcome but something we could live with. And I can’t tell the ice was unusual. Quite contrary, it was welcomed. 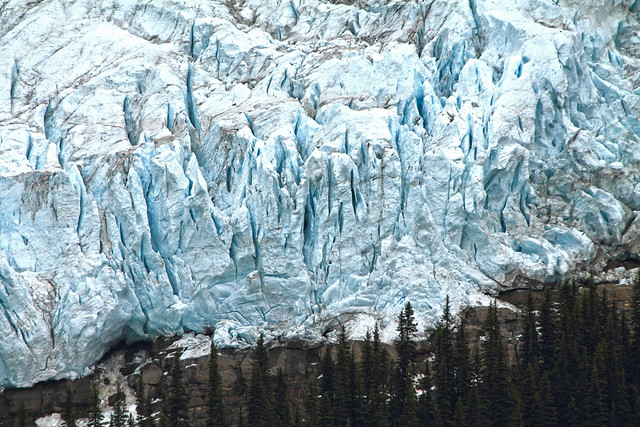