Part two
"The Bald Eagle is a sacred bird in some North American cultures… Eagles are considered spiritual messengers between gods and humans…"
A weather was considerably improved during last few days of 2010. so we decided to go to a place I was thinking about ever since San mentioned something about wintering bald eagles. As everyone of you can see, bald eagle is main symbol in my blog. When, at the beginning of 90s I read a short poem by Ojibwe tribe – Walking over sky, following a bird – I felt I`ve read a words of eternal freedom. And somehow I felt that bird was bald eagle. Despite the fact they are not common in Europe. Despite the fact I saw them two months ago for a first time in my life.
To reach a Squamish, village named after famous first nation`s tribe, we went on Highway 99 (known also as Route 99), north of West vancouver, toward Whistler. Highway was made along the beautiful Howe Sound and with clear blue skies, a view was magnifficent.

Howe Sound
Squamish is placed on a mouth of Squamish river. We read on some website that this year about 1500 eagles were spotted, and, unprepared to what we will see, I expected flocks of them circling over the sky. Actually, we saw about 10 of them. Maybe. And all of them were sitting on trees on the other side of the river, not even interested about people looking their direction, making photos, peaking into their life with telescopes and binoculars.

one of the bald eagles 😀
Anyway, as I said, weather was wonderful, so we used that opportunity to see Shannon falls and Stawamus Chief rock, which are actually, one near the other. On a parking lot, a warning…

:bandit:
Shannon Falls are 335 m – 1099 ft tall and were named after William Shannon who first settled the property in 1889. and made bricks in the area. 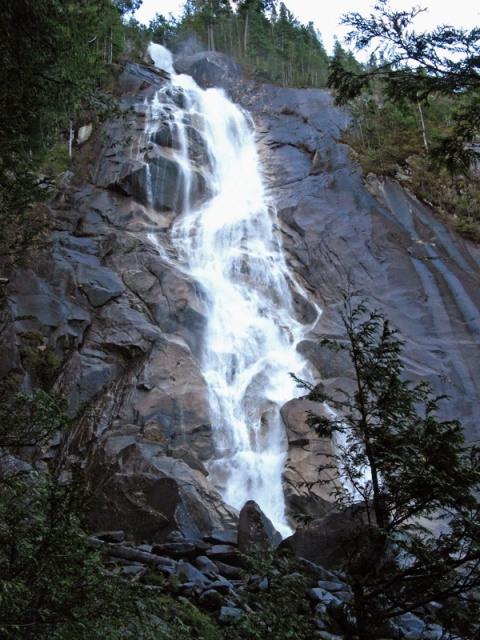 Shannon Falls
Stawamus Chef, or simply The Chief, is 700 m – 2297 ft tall granite rock just in front of Squamish. Made by slowly cooling magma deep below surface of the Earth about 100 million years ago and excavated by erosion for millions of years, this massive monolith (they say it is a second largest granite monolith in the world) is one of the most wanted places for free climbers. We didn`t see any of them but San told me it would not be unusual to see them hanging on the ropes even it was cold – sun rays didn`t have a chance against slow but persistent breeze from mountains :smurf:

Stawamus (St'a7mes) Chief
Next day – or it was on 31st of December :sherlock: – we went on another place, not far from the city but it felt like hundreds of kilometers away. Capilano trail, along Capilano river, through a beautiful canyon and wood, all the way up to a Cleveland Dam. Capilano river is one of the three main sources of fresh water for residents of Greater Vancouver area so the dam was made in 1954. to impound a reservoir for that purpose. The reservoir is actually a beautiful lake, completely closed to public.
Along a way, I became official tree hugger 😀

me hugging Douglas fir
On top, a beautiful view toward a lake and The Lions. 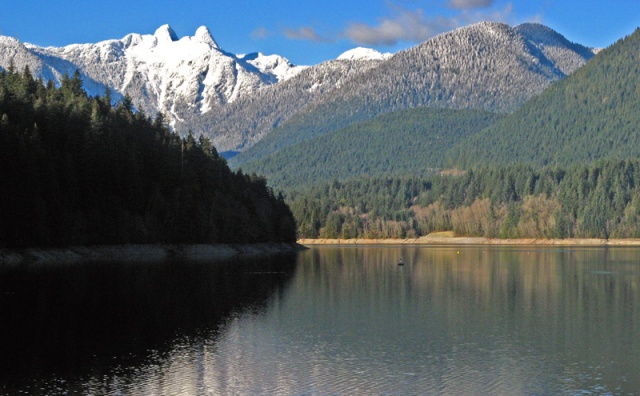 Capilano lake and The Lions
City bus line that goes right to Cleveland park shows you that city is right there, around a corner. But other signs warns you that wilderness is at the corner you are currently walking by.

Be Bear Aware
I was glad it was winter.
***
I thought it will be enough to divide this post in two parts but now I see it`s impossible. So:
To be continued…