Part one
Not necessarilly in this order but something like that.
On our way from Tofino to Vancouver, after a big storm, mountain pass was still covered in snow and it was snowing all the way from Pacific Rim Visitor Centre crossroad to Qualicum beach. Some parts were so difficult that San needed to slow down and keep a distance between us and vehicle in front of us – it was obvious that some of them still had summer tires :faint: No need to mention how dangerous that could be. But I must mention one thing: San is a great driver!!! Despite having difficult weather conditions and spending long time behind the wheel, she was focused and I couldn`t feel a single second of insecurity. I am not much of a driver (the fact that I will have to remedy soon) but I felt so safe like I was driving myself :whistle: 😆
If we forget taking one wrong turn in Nanaimo when we headed toward ferry terminal. I am sorry San, I needed to mention that 😆
They`ve repeated on the radio that storm made sea almost impossible to sail and that several ferries were cancelled and delayed. Ferry we took was delayed but a sea was not THAT rough. Maybe a bit at the beginning but after that it was just as usual. Or what I think is usual. We were already too tired from a whole day trip, all we could think was only a hot shower and bed. Amenities of civilisation 😛
The very next day we were in a car again. This time heading north-east toward Merritt, Salmon Arm and Vernon. To meet friends and family. Weather was promising – cloudy but without dangerous storms. Snow on the mountain pass, of course, but the rest of it was mostly dry. This part of BC was having dry winter this year. This is what Merritt looked like – a view from a hill just above the city. 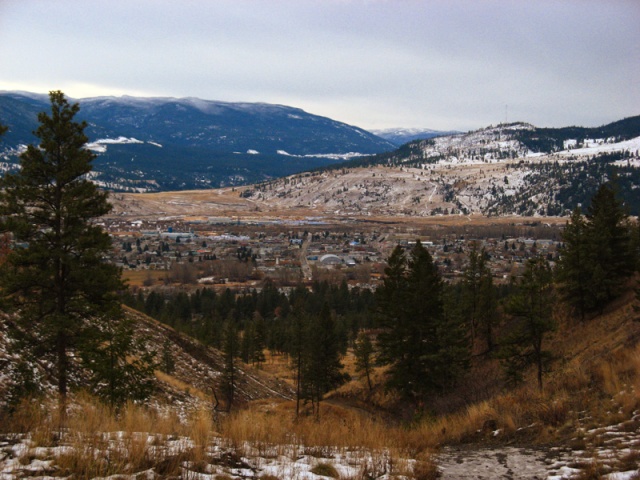 Merritt
Not even close to what my friends were telling me Canadian winter will look like – back then it was only melting snow and mud. Tomorrow, closer to Kamloops it was even drier – not a single snowflake on the ground. But San told me it was not that unusual. This part of BC is always dry and could be very hot in summer. 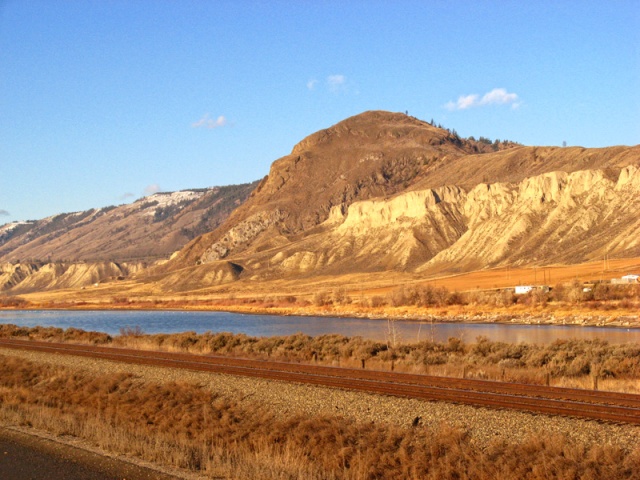 Thompson river near Kamloops
To say the truth, there was some snow in center of Kamloops but not more than in Merrit or Vernon.
Vernon was the last stage of our trip. With population of about 35000 people, Vernon is the largest city in North Okanagan Regional District. Area was inhabited by Interior Salish people who were overrun by fur traders at the beginning of 19th century. Vernon was formed around Swan lake and after a gold was discovered in nearby creeks, miners and cattle farmers made its growth faster. City of Vernon was incorporated in 1892. During both World Wars, it was a place where military training camps for Canadian army were organized. Also, during WWI, internment camps for Ukrainian Canadians was formed in what is today site of W.L Seaton Secondary School; during WWII a camp for people of Japanese descent (mostly from Vancouver) was in the area.
Today, Vernon looks like sleepy quiet town surrounded by hills, with its flat surface lakes: Okanagan, Kalamalka and Swan. 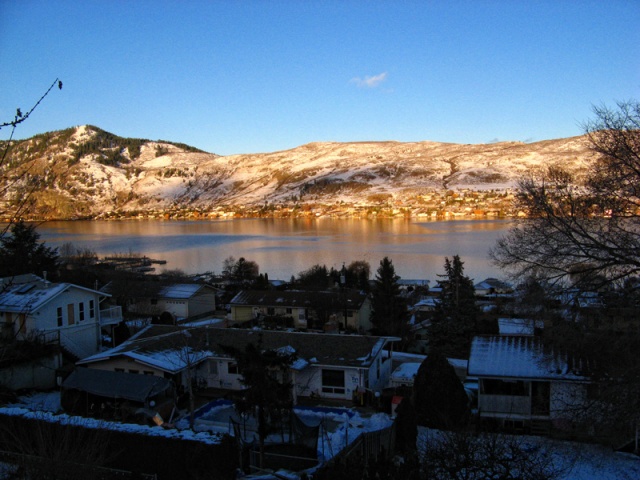 Okanagan lake near Vernon, early in the morning
Our trip back to Vancouver, with few occassional stops, presented no unexpected events. There was a little snow on the way back to Merrit and it was snowing on the mountain pass, of course. But weather was sunny and cold most of the way. I saw my first "real" coyote. Unfortunately it was too far to make a decent photo. And you know them – too careful to let you come closer. And I saw a big deer. And a lot of cattle, enjoying cold sun, sniffing the air. Another storm was on its way but it was still quiet.
But eagles kept their sentinel eyes on us…