Only the dead have seen the end of the war.

March 24th. I am sitting at home, doing nothing special. Wednesday as usual, I came home from job, ranting about salary that will not come in time. Wanted to watch the news on the TV but then remembered there will probably be nothing interesting – bad news as every single day. Tried to read a book but got bored very soon.
Telephone rang, my friends from sixth floor are inviting me to join them in eating a cake. Yay!!! The solution for boring evening. Put my sneakers on, say :bye: to grandparents, running down to sixth. We spend some time talking, eating cake, doing what friends usually do. TV was on, sound muted, evening news. Then I saw something on a screen: NATO aircrafts attacked Yugoslavia half an hour ago. I could not believe, we didn't hear any warning sirens. I ran to the balcony, looking with disbelief at explosions across the Danube. Anti aircraft defence firing, red trails all over sky. Then I looked up and saw stars moving….. 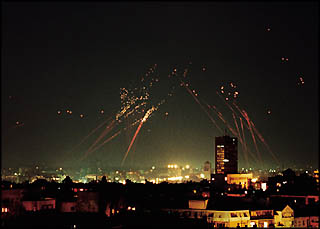 I called my friend, we were in the same military unit during 1992. and asked him if we are supposed to go to our unit but he said he already contact them and was told to wait. They were not at the same place anyway….
This is how it started ten years ago. During 78 days of "Allied forces" campaign, USA led NATO aircrafts made over 36000 flights, severely damaging military barracks, factories, telecommunications, schools, bridges, private houses and appartment buildings. Over 2000 civilians and 1000 soldiers died. About 13000 tons of uranium based ammunition were fired, mostly in Kosovo, and 37000 small cluster bombs were dropped over urban areas in our towns, intended for deliberate frightening of civilians…
I have seen Tomahawk missiles two times, flying literally over my head. I was passing by Chinese embassy 5 minutes before it was hit with bomb from US B-2 bomber, leaving few Chinese citizen dead under the walls. I saw when a plane from German Luftwaffe severely damaged and destroyed TV tower in Avala, a symbol of Belgrade. Sat whole night at the top of my building watching bombs dropping on nearby military airport. Spent a night in underground station, watching terrified people and scared kids. This is when I decide I will never go hiding again.
A lot of people died but among them I will never forget one death. Milica Rakic was only 3 years old when she died of a fragment of a cluster bomb that hit her in head while she was sitting on a chamber pot in bathroom… (direct link, scroll down to read testimony of her father). According to general Wesley Clark, the Supreme Commander of NATO forces, she and other civilian casualties were just "collateral damage". Just…

51 Responses to A Decade